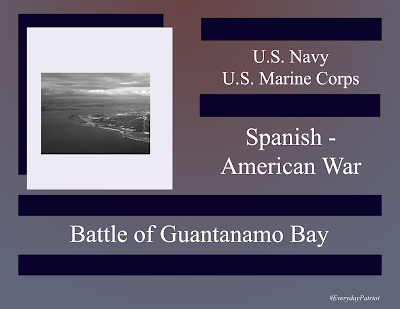 After the Spanish American War was declared on April 21, 1898, it was decided to secure Guantanamo Bay, as Caimanera, Cuba, was an important port for Spain.

On June 6, 1898, the USS Marblehead, the USS St. Louis, and the USS Yankee entered Guantanamo Bay at dawn and cleared the Spanish Forces from the blockhouse on McCalla Hill. Although the Spanish ships Alvarado and Sandoval tried to intercept, they were outgunned by the USS Marblehead.  The telegraph cable linking Fisherman's Point to the rest of Cuba and to Haiti was severed at this time.

On June 10, 1898, the First Battalion of the Marine Corps arrived from Key West Florida, landing at Fisherman's Point and began to occupy McCalla Hill, rechristening it Camp McCalla.

Camp McCalla was poorly positioned, the ground surrounding it was hilly and covered with thorny brush and cactus. Another issue was the forward posts, they were too far forward and couldn't communicate with each other or the main post.

While unloading supplies, it seemed quiet, the marines only hearing "cooing doves", which was actually signals between Spanish guerilla fighters.

The Spanish guerillas attacked before trenches were dug and before artillery was completely unloaded. The enemy soldiers were difficult to see because they were using palm leaves for camouflage and smokeless cartridges.  Snipers were a large problem for the U.S. Marines and despite assistance from the USS Marblehead, the Spanish fighters came to within 50 years of the camp. The fight lasted for 100 hours.

On the morning of June 13, 1898, reinforcements from the Cuban army arrived, and familiar with the Spanish guerilla tactics, proceeded the burn the brush and undergrowth from around the camp.  Even with the reinforcements, the camp was hard pressed by the Spanish the following evening.

Following the advice of Lieutenant Colonel Enrique Thomas of the Cuban Army, plans were made to attack the Spanish Garrison at Cuzco Well.

June 14, 1898, involved a hot march over very overgrown terrain and one group of Marines came under fire prior to the second group arriving to provide crossfire.  The attack was also initially hampered by faulty signals being relayed to the USS Dolphin, who ended up firing on a small group of US Marines and Cuban Soldiers. Private John Quick climbed a hill to signal the USS Dolphin and alter their direction of fire.  After which, an effective attack was launched against Spanish forces, who by 2pm had fled across the gully, and unable to reestablish their lines, retreated back to Dos Caminos.

Camp McCalla saw no further significant action and was used as an outpost to bomb shorelines, clear the underwater mines in Guantanamo Bay and to attack Caimanera.  Camp McCalla was also the staging point for the Invasion of Puerto Rico.