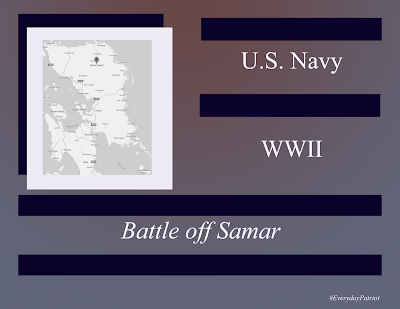 In the early morning hours of  October 25, 1944,  a Japanese fleet under Admiral Kurita passed through the San Bernadino Strait and after traveling South down the coast of Samar, engaged U.S. Naval Task Unit 77.4.3 - known as "Taffy 3" and the "Battle Off Samar began.

Convinced that a Northern force, commanded by Vice Admiral Ozawa, was an immediate threat, the Third fleet had been lured North, leaving only three escort carrier groups in the vicinity.

Taffy 3 was a contingent of slower moving ships, designed and equipped for ground troop support, anti-aircraft, and anti-submarine warfare. There were very few torpedos.  Taffy 3 was ill-equipped for ship-to-ship combat and had relied upon the Third Fleet for protection. Hence Vice Admiral Sprague's order to "Open fire with pea shooters when in range."

On the morning of October 25, 1944, as the anti-submarine patrol began, one of the planes spotted the Japanese Battleships Yamato, Nagato, Kongo, and Haruna, and heavy cruisers Chokai, Haguro, Kumano, Suzuya, Chikuma, Tone, along with the light cruisers Yahag and Noshiro.  Taffy 3 had been taken completely off guard by the appearance of the Japanese ships and was ill-equipped to handle it.

There were several factors working in Taffy 3's favor.  Admiral Kurita was unsure if the ruse to lure the Third fleet had been successful.  He also did not have the correct identification of the escort carriers profile, and, assuming they were the fleet carriers of the Third Fleet ordered a general, rather than a coordinated, attack.  Finally, a storm had moved in causing low visibility making it difficult for the Japanese ships to site their guns properly.

At 7 AM, when the battle began, Vice Admiral Sprague ordered the escort carriers to generate smoke, increasing the visibility challenges and launched his aircraft, ordering them to attack once, drop whatever they had (most had machine guns and depth charges only), and proceed to Tacloban Airstrip at Leyete (many pilots disobeyed and continued to "dry run").

Using the smoke and low visibility to their advantage, the destroyers Hoel, Heerman & Johnston quickly zig-zagged through the smoke, strafing the large battleships before disappearing into smoke screens, launching whatever torpedos they had. Destroyer escorts also relied largely on the smoke screens, torpedos, and side guns.

Because of the aggressiveness of the attack and the escort carrier misidentification, Admiral Kurita, was still afraid he was battling a part of the Third Fleet, and after receiving word that the Southern Force he was to meet up with had been disabled, ordered his fleet to withdraw at 9:20 AM and return through the San Bernadino Straight.

Although the Japanese ultimately withdrew, the battle came at a heavy price to the U.S. Navy. The Hoel, Johnston, Samuel B. Roberts, and Gambier Bay had sunk, and the Kalinin Bay and Heerman were heavily damaged.  The St. Lo initially escaped without serious damage but was sunk after kamikaze attack.