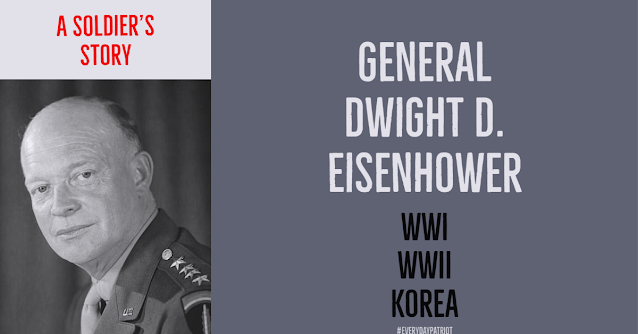 General Eisenhower was born on October 4, 1890, to David Jacob Eisenhower and Ida Elizabeth Stover.  He was the third of seven boys.   He was raised in Abilene Kansas.

General Eisenhower was appointed to West Point in 1911, graduating in 1915.

During WWI, he commanded a tank training center at Camp Colt and in 1922 was in the Panama Canal Zone, with General Fox Conner.

He graduated from the Command and General Staff School, Fort Leavenworth in 1926 and then reported and toured for the War Department until 1929.

1941 saw General Eisenhower as the Chief of Staff of the Third Army, and later, in 1942 became the Commander in Chief of the Allied Forces, commanding Operation Torch and D-Day.  He was also the governor of the US Occupied Zone.

After his retirement from active service, he campaigned and won the office of President of the United States, where he is credited with the armistice of Korea, the successful handling of the crises in Lebanon and Suez, the development of the Atoms for Peace program, the creation of the US Information Agency.  Alaska and Hawaii were established as states during his presidency.  He has supported the creation of the Interstate Highway System.  President Eisenhower signed the 1957 Civil Rights Act and established the Civil Rights Commission.