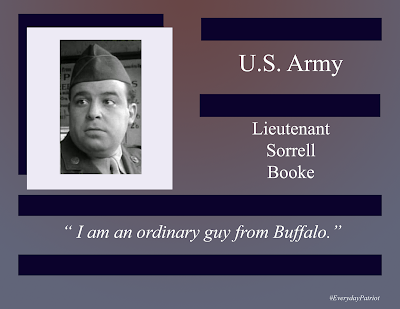 Always a performer, he used to do impressions for the local radio stations while attending Bennet High School, where he graduated class valedictorian in 1948.

After high school, he attended Columbia University, moving to Yale University to receive his master's degree.  His college education was briefly interrupted by his enlistment in the U.S. Army during the Korean war, where Lieutenant Booke served as a counterintelligence officer.

In 1960, after many years spent on the stage, Lieutenant Booke made his way to Hollywood, taking on several roles in film, including a role in the movie Black Like Me before focusing on television roles.

Lieutenant Booke was nominated for an Emmy for his role in Dr. Kildare and he also appeared on M*A*S*H and All in the Family before landing his most famous role, that of Boss Hogg in the Dukes of Hazzard, for which he donned a fat suit to fill the character out.

Lieutenant Sorell Booke died on February 11, 1994, of cancer and rests in the Hillside Memorial Park in Culver City California.