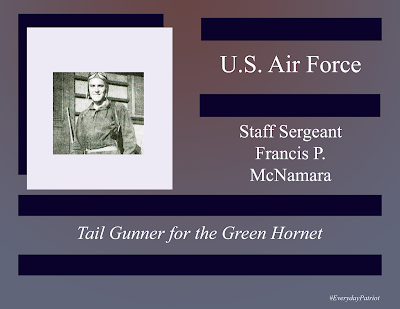 He immigrated to the U.S. at one-month-old aboard the USS Baltic and grew up in Parma Ohio.

SSgt McNamara enlisted in the US Army Air Services on March 19, 1942, and was trained as an ariel gunner.  He was assigned to the 11th Bombardment group and deployed to the Pacific theater.

On May 27, 1943, during a rescue mission the plane he was on, the Green Hornet, crashed into the Pacific.  SSgt McNamara, 1st Lt Russell Allen Phillips, and 1st Lt Louis Zamperini were the only survivors and were adrift in the ocean.

After 33 days, on June 30, 1943, Staff Sergeant Francis P. McNamara succumbed to starvation and exposure and was buried at sea. He is memorialized in the Court of the Missing at the Honolulu Memorial.