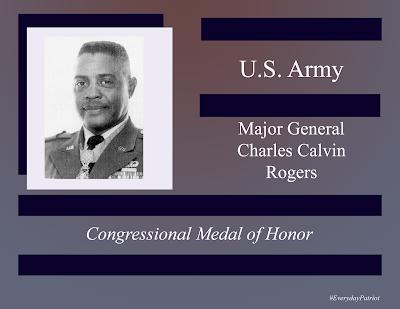 He began his U.S. Army career through the ROTC program at West Virginia State University, graduating in 1952.

Assigned to artillery units throughout Korea and Vietnam, Major General Rogers earned the Congressional Medal of Honor on November 6, 1968, while commanding the 1st Battalion fire support base near the Fishhook region of Vietnam.

The post had come under heavy attack, a Major General Rogers continued to rally the Battalion and leading attacks, despite being wounded.

After recovery, he was assigned to the office of the Deputy Chief of Staff for military operations.  He also continued his education, attending the U.S. Army War College and earning a Master's degree from Shippensburg State College.

By 1971 he was assigned as the assistant deputy commander of V Corps artillery, then as commanding officer of 42nd Field Artillery Group. He then was assigned the commanding general post of the VII Corps in Europe.

He returned to the U.S. for a couple of years to serve as the Deputy Chief of Staff at the ROTC headquarters before ending his career in Europe commanding the V Corps and then the VII Corps.

After Major General Rogers's retirement, he became an ordained minister and continued to serve the U.S. Army as a minister.