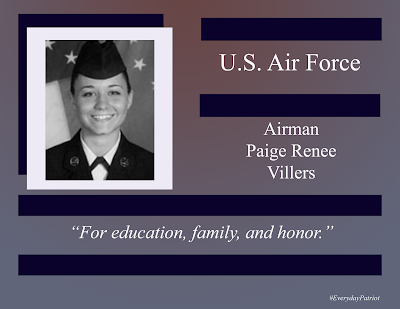 Airman Paige Renee Villers was born on November 3, 1987. She grew up in Norton, Ohio, graduating from Norton High School in 2006  and enlisted in the U.S. Air Force.

Airman Villers left for basic training on March 13, 2007, and, along with many other Airman, contracted an adenovirus, often referred to as "the boot camp flu".

Unfortunately, Airman Villers's illness developed complications and she was hospitalized for pneumonia.  She graduated from basic training at a special ceremony held in the hospital before succumbing to damage caused by the infections.