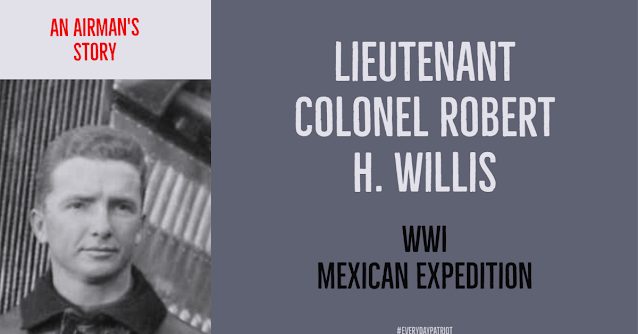 He attended the Citadel, graduating in 1908.  He was first ordered to the 6th Infantry and on 1 January 1910, his unit deployed to Mindanao Philippines.

He was accepted into the Signal Corps Flight School and became a military aviator.

With the first Aero Squadron, he was stationed at Fort Sill OK, Fort Sam TX, and Columbus NM.  He flew during the Mexican Expedition, crashing twice. After one, realizing that his plane was totaled, he set fire to it and walked 65 miles back to San Antonio with a broken ankle.

On 1 September 1918, he was ordered to become the Chief of Air Service of the Seventh Army Corps but died on 13 September from an accidental weapons discharge.

General Pershing wrote a letter to his father, praising Lieutenant Colonel Robert H. Willis, referring to him as “imbued with the ideals of the true soldier”