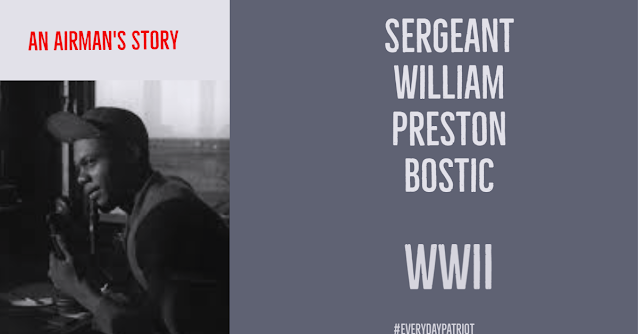 Sergeant William Preston Bostic was born on the 5th of October 1917, in Detroit Michigan

Sergeant Bostic attended Ann Arbor high school and enlisted in the US Army Air Services on the 28th of November 1940. He was assigned to the Tuskegee Airmen and headed to Alabama for training and deployment orders.

Ruth Buchanan, also known as “Aunt Ruth”, wrote to Sergeant Bostic.  In his letters he wrote of being tired of waiting to get orders, He also spoke of how enlightening travel is and of pestering his future grandchildren with stories.

He ultimately served in both the European and Pacific theaters.

After the war, Sergeant Bostic moved to California and died on November 14, 2002.  His ashes were scattered in the Garden of Remembrance at the El Toro Memorial Park in Lake Forest California.