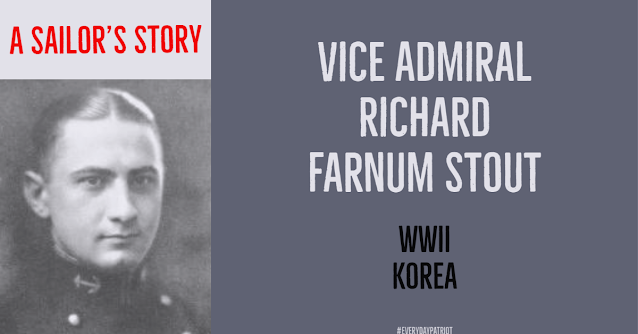 Richard F Stout was born September 26, 1902, to Charles and Frances (nee Farnum) Stout and was raised in Trenton New Jersey.
He entered the Naval Academy and graduated in 1924. During his time at the Academy, his love of food was well known, and he had a locker full of treats and snacks. He also had a penchant for cigars.
He married Virginia Hollinger, who later illustrated “Portraits of a China Scroll”

Vice Admiral Stout was in command of the U.S.S. Hull during the attack on Pearl Harbor and discovered, as written in the action report dated December 7, 1941, that if the boats could maintain consistent fire, they could weather the attack.

He received the Silver Star in WWII commanding the U.S.S. Hull for his protection of supply and reinforcement boats to the Solomon Islands.

He also received the Legion of Merit in Korea commanding the U.S.S. Toledo for his gunfire support at P’ohang and the assault on Inchon.