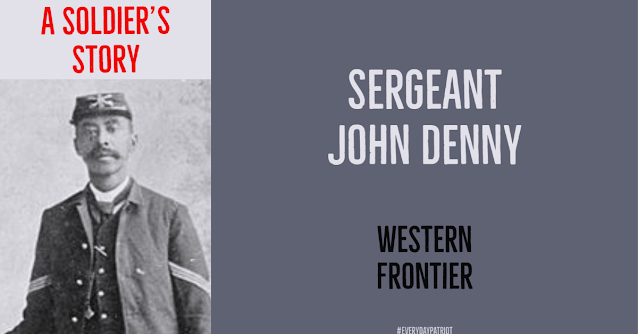 Sergeant John Denny was born in 1846 at Big Flats New York, a small agricultural community West of Elmira.  Prior to his enlisting in the US Army, he worked as a laborer.

He joined the ranks of the 9th Cavalry "Buffalo Soldiers", so described because of  their hair, the buffalo coats they wore or because they were considered stubbornly fierce fighters

The life of the 9th Calvary was harsh and met with hunger. Lieutenant Grote Hutcheson wrote in his report, The 9th Regiment of Calvary, "The stomachs of the men, even more than their bodies were subject to a spartan simplicity".

Sgt Denny would remain with the 9th Calvary for 30 years, fighting in Kansas, Texas, New Mexico, Wyoming, and Utah. He, while under heavy fire in Las Animas Canyon New Mexico, carried another wounded soldier to safety, an act which earned him the Congressional Medal of Honor.

Sgt Denny retired from the U.S. Army on September 21, 1897,  living out his days in Baltimore Maryland.  He died on November 28, 1901, and is buried in the U.S. Soldier's and Airman's Home National Cemetery.