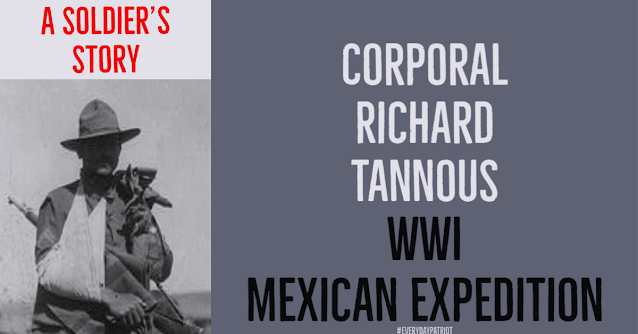 Richard Tannous was born on the 6th of November in Jaffa Israel, the son of Episcopalian missionaries.

Corporal Tannous immigrated to the United States, via Patras Greece, on the SS. Elda, arriving in New York on the 16th of October 1912.

He enlisted in the Army on 23rd of September 1917, serving in the 13th Cavalry, under the command of Major Tompkins.  He was wounded in the Parral Fight.

The Corporal's Army service helped gain his citizenship in 1918.

After his discharge, he went to work for the Ward Baking Company.  There are advertisements for Tip Top Bread, one of the brands manufactured, featuring Richard Tannous as the master baker.  Tip Top bread was ultimately transformed into the famous Wonder Bread.