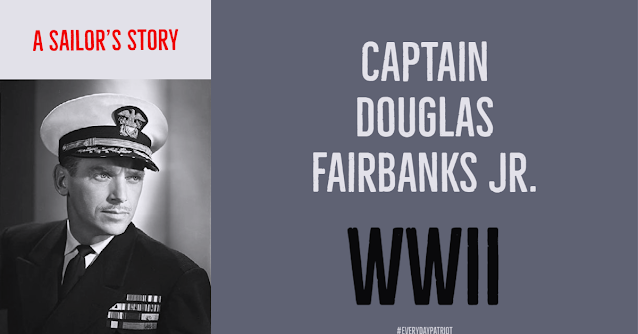 Captain Douglas Fairbanks Jr. was impressively active throughout his life.

He began his acting career at 14 and ultimately participated in about 100 productions.

At the start of WWII, he joined the US Naval Reserves and served actively until May of 1946, retiring from the reserves in 1954.

In addition to earning several medals during WWII, including a Silver Star and a Legion of Merit, Captain Fairbanks also has three stars on the Hollywood Walk of Fame.

He wrote an autobiography "Salad Days" in 1988 and related his WWII experiences in the book "A Hell of a War" published in 1993.
Captain Douglas Fairbanks died on May 7, 2000, and rests in Hollywood Forever Cemetery in Hollywood California.