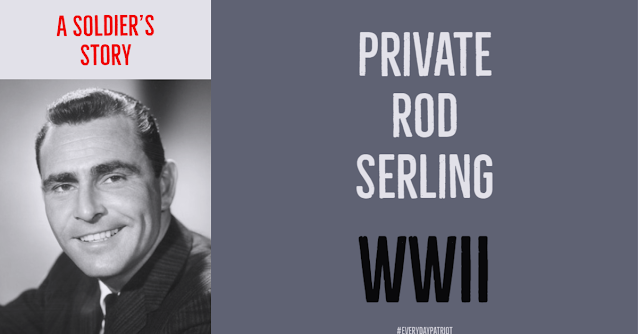 Private Rod Serling, was born December 25th, 1994 to Ester Cooper and Samuel Lawrence Sterling.  His parents encouraged his story-telling talent and during high school, he was on the debate team, wrote for the school newspaper and spoke at his high school graduation.

He enlisted in the US Army the day after he graduated and served as a member of the 511th Parachute Infantry Regiment of the 11th Airborne Division.  Serving during combat was especially challenging to Private Serling, however, he completed his time of service and earned a Purple Heart, a Bronze Star and the Philippine Liberation Medal.

Private Serling used the GI bill to obtain a Bachelor of Arts in Literature from Antioch College and began writing scripts for both radio and television. His best-known show is the Twilight Zone, which allowed him to portray current issues, such as racism,  from a science fiction perspective, allowing the content to bypass the censorship of the day.

Private Serling has won 7 Emmy's, and Edgar Allan Poe Award, a Golden Globe, a Peabody and 2 Writer's Guild of America Awards.  He was inducted into the Television Hall of Fame in 1985 and has a star on the Hollywood Walk of Fame.   In 2008 he was inducted into the science fiction hall of fame.
Private Rod Serling died on June 28, 1975 and rests at the Lake View Cemetery in Interlaken New York.