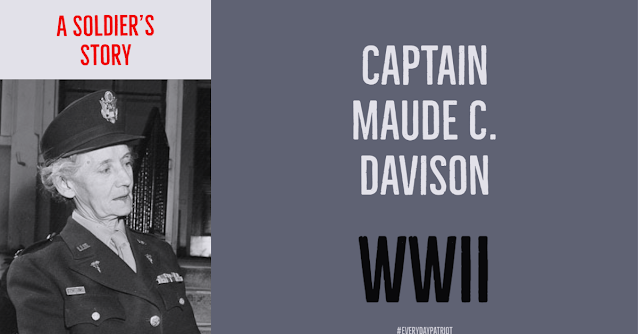 Captain Davison initially trained as a Dietitian, earning her certificate from the MacDonald School of Home Economics.  She immigrated to the United States, working as a dietitian in South Bend Indiana, before moving to California and attending the Pasadena Hospital Training School for Nurses.  She graduated in 1917.

Captain Davison's military career began with her enlistment as a reserve nurse in the Army Nurses Corp in 1918 and in 1920 became a US citizen as well as a member of the Regular Army Nurses Corps.

She was assigned to the Philippines in 1939 as Chief Nurse and was serving in the Philippines when the Japanese attacked in December 1941.  Transferring to the underground hospital in Corregidor, she continued to supervise the nursing until the surrender of Corregidor in May 1942.

It was Captain Davison's insistence that the nurses stick together and to always be in uniform that saved her staff during their capture.  She and her 66 nurses all survived the 34 months at the Santo Tomas Prison Hospital, despite the near starvation.  She is known for telling a group of high ranking Japanese officers that they couldn't enter the nurse's quarters without her permission.

February 3, 1945, the POWs were liberated and Captain Davison medically retired from the Army in 1946.   She married her longtime friend Charles Jackson in 1947 and lived a quiet life until her death in 1956.