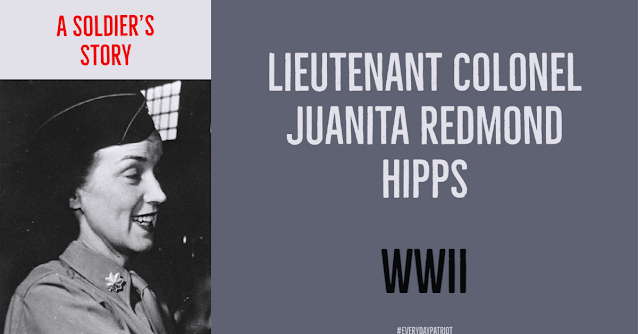 Lieutenant Colonel Juanita Redmond Hipps was born July 1, 1912, in Swansea SC.  She received her nurse's training from the South Carolina State Hospital. She entered the Army Nurses Corps in 1936 and was initially stationed at the Hot Springs Army Hospital.

She was transferred to Manilla and served in the hospitals at Bataan and Corregidor, being one of only eight nurses that managed to escape prior to the surrender of Corregidor.

She assisted in establishing the US Air Corps Flight Nurse Program.

For her actions during WWII, she received a Bronze Star, a Purple Heart, and three Presidential Unit Citations.

LTC Hipps wrote about her experiences in her book "I served on Bataan", which was later used as the basis for the movie "So Proudly We Hail".

She married retired General William Hipps, and their son William Jr. was born in 1949.

After her retirement, she kept herself busy as a member of the St. Petersburg Women's Club, Welcome Wagon Club, Suncoast Auxiliary of Goodwill, and the Retired Officer's Club.