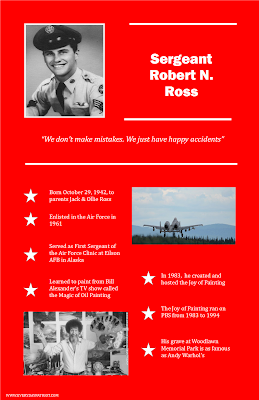 He was raised in Orlando FL.

Sergeant Robert Norman Ross, enlisted in the Air Force in 1961, serving as a medical records technician. Rising to the rank of Master Sergeant and held the post of First Sergeant of the Air Force Clinic at the Eilson Air Force base in Alaska.

He had seen Bill Alexander's TV show, the Magic of Oil Painting, and studied with Mr. Alexander.


Sergeant Robert Ross created the Joy of Painting, which ran for 11 years.  A lot of his paintings were inspired by the Alaskan scenery he had seen during his time in the Air Force.

His hair, originally permed to save money, became part of his image, one that he never really liked much.

Another part of his image, his soft, cheerful voice, was also influenced by his Air Force career, saying that he had yelled so much in the Air Force that he never wanted to yell again.

Sergeant Ross was also a big fan of country music.

He passed away on July 4, 1995, due to lymphoma, as his buried at Woodlawn Memorial Park.  His grave is visited just as much as Andy Warhol's.