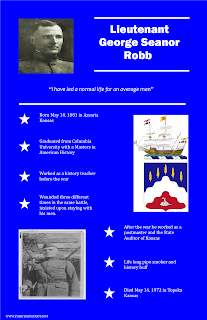 Congressional Medal of Honor recipient was born on May 18, 1881, in Assaria Kansas, he attended college at Columbia University, earning a Masters degree in American History and worked as a school teacher before the war.

He enlisted in WWI for the history of it and was assigned to the 369th infantry, also known as the Harlem Hellfighters.  During the assault on Sechault, he was wounded on three separate occasions, leaving his trench only once, under orders, for medical attention, and returned promptly to his men after treatment.

After the war, he was the postmaster of Salina before being appointed to the post of State Auditor in 1935 and was re-elected for that position for the next 35 years.

He was considered a soft-spoken individual and believed that respect from his fellow man was better than the stature of a hero.

After his retirement, he spent his time studying history.