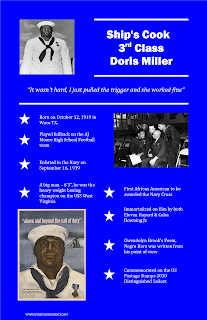 He attended A.J. Moore High School and played fullback on the football team until leaving school to help support his family, both by farming and working part-time at a local diner.

He enlisted in the US Navy on September 16, 1939, and was transferred to the USS West Virginia on January 2, 1940, serving as Mess Attendant.  He was also the heavyweight boxing champion of the ship.

On December 7, 1941, when the Japanese attacked Pearl Harbor, he manned a Browning 50 caliber anti-aircraft gun in defense of the ship, despite having received no weapons training (the US Navy did not allow African Americans in combat roles at that time)

After running out of ammunition, and with orders to abandon ship, he assisted in moving injured sailors off of the ship, including mortally wounded Captain Mervyn Bennion.  He received the Navy Cross for his actions, the first African American to do so.

He was later assigned to the carrier Liscome Bay, which was torpedoed during the Battle of Makin Island on November 24, 1943. Ship's Cook Doris Miller, as well as 2/3rd's of the 900 crew, were missing and presumed dead. His memorial service was held April 30, 1944, in Waco Texas.

His actions during the attack on Pearl Harbor earned him quite a bit of recognition, he was featured on the Navy recruitment poster "Above and beyond the call of Duty" and gave talks in Oakland California, Waco Texas, Dallas Texas and the first graduating class of African American sailors at the Great Lakes Naval Training Station in Chicago Illinois.

His actions were dramatized in "They Live Forever" a CBS radio series and Gwendolyn Brook's poem Negro Hero.

Actors Elven Havard and Cuba Downing Jr. represented his actions in film and he was also featured in the "Distinguished Sailors" US Postal Service Commemorative Stamps.  The US Navy has also named a Knox class frigate, USS Miller, in his honor.