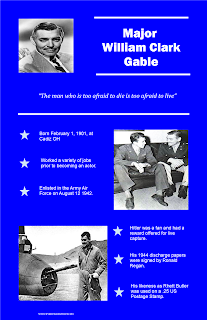 Major Gable was born in Cadiz Ohio on February 1, 1901.  Prior to establishing himself as an actor, he worked in oil fields, as a horse manager, at the Firestone Rubber Co, and as a necktie salesman at Meier and Frank.

His resonant voice is the result of many voice training classes.

Major Gable enlisted in the US Army Air Force on August 12, 1942, after the love of his life, wife Carole Lombard, died in a plane crash while promoting war bonds.

He trained as an aerial gunman and did fly combat missions at RAF Polebrook with the 351 Bomber Squadron.  Major Cable was also given a special assignment to make a recruiting film for aerial gunners.

Hitler, a big fan, put out a bounty for his unharmed capture and was disappointed.

Ronald Regan signed his discharge papers on July 12, 1944, and Major Gable returned to acting, receiving a star on the Hollywood Walk of Fame on February 8, 1960.  He died in November of the same year,

Th US Postal Service used his likeness as Rhett Butler on the US Commemorative Postage Stamps honoring classic films of 1939.