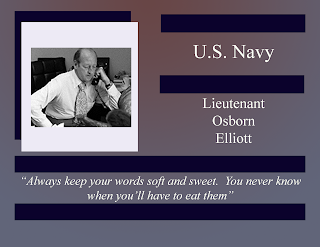 On October 25, 1924, Osborn Elliott was born in New York City, New York.  He started his first newspaper by the age of eight.

Lieutenant Osborn Elliott graduated from Harvard and enlisted in the U.S. Navy during WWII, serving in the Pacific aboard the heavy cruiser Boston.

After the war, he began his (paid) journalism career, first at the Journal of Commerce, then at Time.  In 1955 Lieutenant Osborn Elliott moved to Newsweek, where he introduced by-lines and became the Editor in Chief in 1969.

Civically, Lieutenant Osborn Elliott was also active, founding in 1975, the Citizen's Committee for New York City with Senator Jacob Javits, and in 1976 became the Deputy Mayor of New York.

Lieutenant Elliott also contributed to education and was named dean of the Columbia University Graduate School of Journalism.

Popular posts from this blog

Despite his political affiliations and tuberculosis, he managed to re-enlist in the U.S. Army in 1942, after the attack on Pearl Harbor.  Sergeant Hammett was assigned as editor of the Army newspaper The Adakian.  He also co-authored, with Sergeant Robert Colodny, The Battle of the Aleutians, under…
Read more