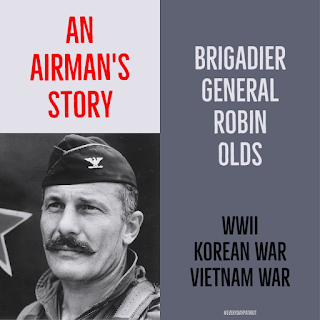 His family moved to Hampton Virginia and he attended Hampton High school, where he was the class president and member of the 1937 state champion varsity football team. General Olds graduated in 1939 and turned down scholarships to both the Virginia Military Institute and Dartmouth University to attend West Point's Millard Prep School.

After the attack on Pearl Harbor on December 7, 1941, his academy education was interrupted so he could attend the Spartan School of Aeronautics.  His entire class graduated a year early, in June of 1943, because of WWII.  General Olds would receive his pilot wings and head to Williamsfield Arizona to complete his pilot training.

General Olds was assigned to the 434th Squadron and deployed to Europe where he would dogfight and provide air support for the Invasion of Normandy, participate in the air battles over Germany and Luxembourg.

After the war, he briefly served as the assistant football coach at West Point, took 2nd place in the Thompson Trophy, and performed transcontinental "dawn-to-dusk" flight from March Field in California to Washington D.C. and back again, before he returned to an air unit and commanded a unit with the Royal Air Force under the Royal Air Force Exchange Program. 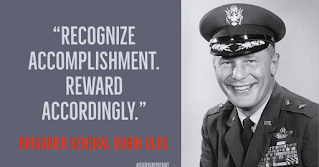 During the 1950s and early 1960s, General Olds would have several assignments, both administrative and air command, despite his strong preference for air units. He graduated from the National War College in 1963.
In 1966, General Olds would head to Thailand to command the Eighth Tactical Fighter Wing at Ubon Royal Air Base in Thailand and participate in air support for Vietnam from there.
Brigadier General Olds became the Commander of Cadets at the US Air Force Academy in December of 1967, where he would remain until 1971 when he became the Director of Aerospace Safety at the Air Force Safety and Inspection Station in Norton Air Force Base.
He retired from the military in 1973 and moved to Steamboat Springs Colorado, and spent his remaining years as a writer and lecturer.
Brigadier General Robin Olds died on June 14, 2007, and rests at the US Air Force Military Academy.
Air Force Korea Vietnam WWII
Location: Honolulu, HI, USA