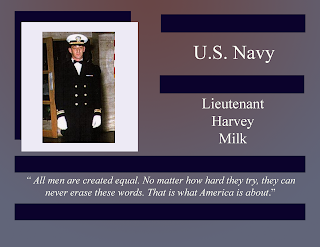 Harvey Milk was born on May 22, 1930, in Woodmere, New York, where he attended Bay Shore High School (where he played football) and the New York State College for Teacher.  He had a deep love for opera.

Lieutenant Milk joined the U.S. Navy during the Korean War, serving as the diving officer aboard the USS Kittiwake and as a diving instructor at the Naval Station in San Diego.

After his time in the Navy, Lieutenant Milk worked as a high school teacher, an actuary, and a Wall Street researcher before embarking on a political career in San Francisco.

Becoming known as the Mayor of Castro Street (he was a San Francisco Supervisor), his campaign platform included gay rights, improved child-care and public transportation, and civilian oversight of the police.  Lieutenant Milk was the first openly gay politician to be elected.  He was assassinated, with Mayor Moscone, on November 27, 1978, by a fellow San Francisco Supervisor.

You can find some of his ashes encapsulated in front of 575 Castro Street in San Francisco.