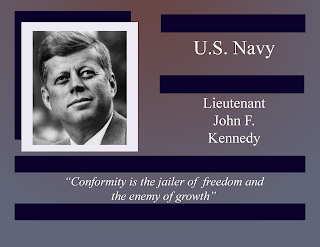 Lieutenant John F. Kennedy was born on May 29, 1917.  While he was growing up, he participated in the Bronxville Boy Scout Troop Two and had his appendix removed at 14.

Lieutenant John F Kennedy was also a prankster. He created the "Muckers Club" and was responsible for blowing up a toilet seat.  He was also the business manager for the school yearbook and voted most likely to succeed.

Lieutenant Kennedy also saw success at Harvard, as a member of the swim team and the producer of Harvard's annual Freshman Smoker.  His thesis, "Appeasement in Munich", became the best-seller titled "While England Slept".

He joined the U.S. Navy on September 24, 1941, volunteering for the Torpedo Boat Squadron, and commanded both PT-109 and PT-59.  Lieutenant Kennedy served until 1944 when he was released with a Purple Heart and three Bronze Stars.

Lieutenant Kennedy worked as a special news correspondent with Hearst Newspapers for a year before beginning his career in politics, becoming the U.S. Representative for the 11th Congressional District in 1946, and a U.S. Senator in 1952, the same year his Pulitzer Prize-winning book "Profiles in Courage" was released.   Lieutenant Kennedy's political career took him next to the highest office, as the 35th President of the United States.    He died November 22, 1963, by assassination.
Biography Navy WWII
Location: Bronxville, NY, USA