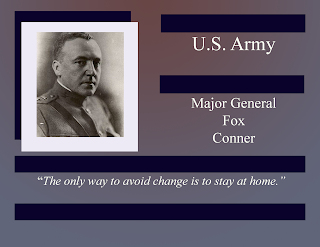 Major General Fox Conner could be considered the most influential general of all time.

Born on November 2, 1874, in Slate Springs Mississippi and graduated from West Point in 1898.

Originally, he wanted to be a Calvary officer. The Army decided otherwise, instead placing him in the infantry.

He served in the Spanish American War, Panama and WWI, with his after action report on WWI influencing the National Defense Act of 1920.

While General Fox had an outstanding career, he is most known for his mentoring. Taking some of the most promising soldiers under his wing, he is known to be the role model for some of the most famous soldiers of WWII, including Marshall, Patton, and Eisenhower.

General Fox is also known for his three principles of war :