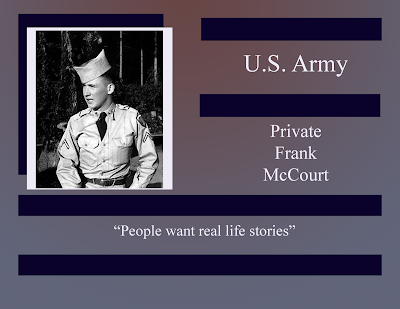 Frank McCourt was born on 19 August 1930 in Brooklyn New York.  His parents, unable to find work during the depression returned to Ireland and he was raised in Limerick.

Frank McCourt left school at the age of 13, supporting himself by working as a telegram delivery boy.   At age 19, with earnings he saved and money he had stolen from a former employer, he immigrated back to New York, working at the Biltmore Hotel.

Drafted in 1951 during the Korean War, he was sent to Germany, training dogs and then working as a clerk.  With his GI bill and a lot of smooth-talking, Frank McCourt was admitted to New York University, where he graduated in 1957.  He taught at various NY  schools, earned a master's degree from Brooklyn College in 1967.

During his retirement from teaching, he began to write his memoirs, with Angela's Ashes, winning the Pulitzer Prize. He also wrote Tis and Teacher Man.

After his death on July 19, 2009.  New York established the Frank McCourt High School of Writing, Journalism, and Literature.  The Frank McCourt Museum and Writing center, located in Limerick was opened in 2011.