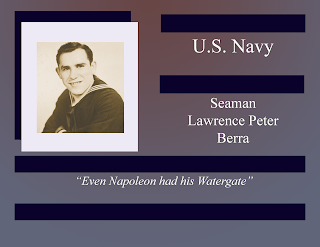 Served during WWII about the USS Bayfield as a gunners mate before starting his career with the New York Yankees in 1946.

Retiring from baseball playing he stayed with the sport by managing the New York Yankees, New York Mets and the Houston Astros.  Yogi Berra was elected to the Baseball Hall of Fame in 1972.