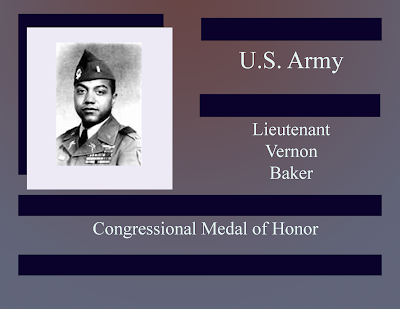 Vernon Baker was born on December 17, 1919, in the rugged Cheyenne, Wyoming.

Entering the U.S. Army on June 26, 1941, he was assigned to the 92nd Infantry and deployed to Italy, where he earned a Congressional Medal of Honor for his action near Viareggio when he single-handedly eliminated three machine-gun nests, an outpost and a dug out.

Lt. Baker remained in the Army, as a career soldier, serving through the Korean War and retiring in 1968.

He spent his retirement working for the Red Cross and hunting, with elk hunting being a particular favorite.  He died July 13, 2010, in St. Maries, Idaho.
Biography Congressional Medal Of Honor Korea WWII
Location: Cheyenne, WY, USA