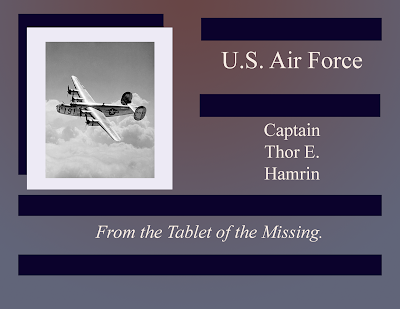 Flying B-24J #42-73018 - I believe the plane was named "Captain and the Kid", however, I have also seen records of him as the captain of a plane named "JITA" (for Jab in the Ass) - Captain Thor E. Hamrin and his crew were last seen going down in flames approximately 12 miles off the coast of Truk, the Philippines on July 28, 1944.  He is remembered on the Tablet of the Missing, located at the Manila American Cemetry.
Labels: Air Force Biography Died in Service Missing WWII
Location: California, USA