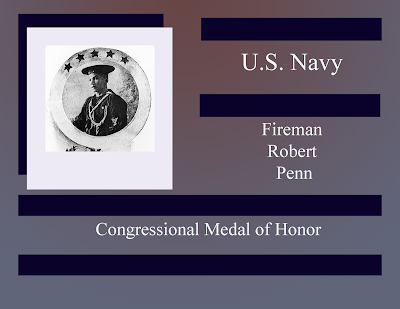 Born October 10, 1872, in City Point Virginia, Robert Penn was raised in an agricultural community and worked as a field hand prior to enlisting in the U.S. Navy.

He earned a Congressional Medal of Honor when a boiler malfunctioned and blew out a manhole gasket.  He repaired the boiler by balancing on wood and coal buckets above the boiling water, saving his fellow sailors and rescuing the USS Iowa.  After leaving the U.S. Navy, he moved to Las Animas, Colorado.  Robert Penn died June 8, 1912.
Labels: Biography Congressional Medal Of Honor Navy Spanish American War
Location: Hopewell, VA, USA