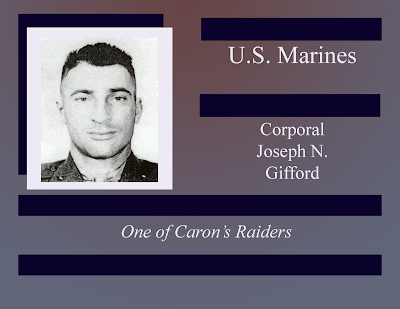 The Californian, Corporal Joseph N. Gifford was one of the Marine Raiders.

Created during WWII, they are considered to be one of the first "Special Operations" military units developed.

Assigned to the 2nd Raider Battalion, also known as "Carson's Raiders",  Corporal Gifford took part in the raid of Makin Island and was captured by the Japanese.  He was executed on October 16, 1942, and is memorialized in the Courts of the Missing, at the Honolulu Memorial.