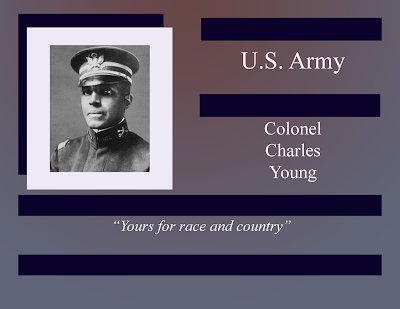 Born on March 12, 1864, in Mays Lick, Kentucky, Colonel Charles Young was enslaved until the passage of the 13th Amendment in December of 1865.

His family relocated to Ripley, Ohio and he attended Ripley High School, graduating in 1880 with the top student of the class.

He taught at a school until in 1883 he took and passed the examination for West Point with the second-highest score in the district.  He reported to the academy in 1884.

Initially Colonel Young struggled with mathematics, in addition to hazing that accompanied the early West Point cadets of African heritage.  He persevered, graduating in 1889 and was assigned to the 9th Calvary.

Colonel Young was highly educated, spoke several languages and was an accomplished musician, playing piano, violin and guitar.  He wrote a book, "The Military Morale of Nations and Races", which was published in 1912 and dedicated to Theodore Roosevelt.

On June 22, 1917, he was retired by the U.S. Army for the official reason of high blood pressure. Unofficially, it was because of U.S. entry into WWI, and, because he would be eligible for the rank of Brigadier General, there was strong resistance from other officers who have struggled to report to a superior officer of African descent.  Colonel Young asked for Theodore Roosevelt for intervention and, after riding a horse from Wilburton, Ohio to Washington D.C. to prove his fitness.  He was reinstated and assigned again to the military attache in Liberia.

At the end of 1921, while on a mission in Nigeria, Colonel Young caught a debilitating illness and died of a kidney infection on January 8, 1922, in Lagos, Nigeria.  After a year in Nigeria, he was finally brought home.  Colonel Charles Young now rests in Arlington National Cemetery.