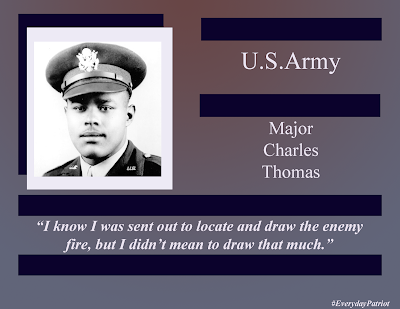 Major Charles Leroy Thomas was born on April 17, 1920, in Birmingham, Alabama.  While he was growing up, he showed both an interest and an aptitude for machinery and electronics, and he was specifically drawn to aircraft.

He attended Wayne State University and worked as a molder for the Ford Motor Company before enlisting in the Army in January of 1942.  He was assigned to complete the Officer's Candidate School, and then assigned to the 614 Tank Destroyer Batallion.

December 14, 1944,  Major (then a Lieutenant) was to lead a storming of Climbach.  He was wounded, twice, while he directed the setup and placement of the anti-tank guns, maintaining return fire, and covered the task force during its maneuver before finally being evacuated from the field.  His actions earned him a Congressional Medal of Honor that was not awarded until 1997.