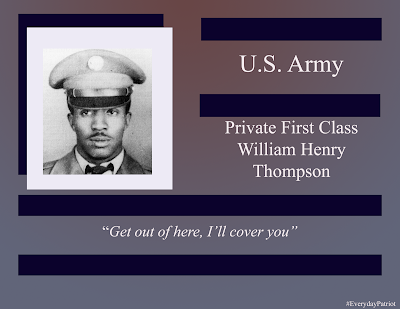 Private First Class William Henry Thompson was born on August 16, 1927, in Brooklyn, New York.  Raised in poverty, he enlisted in the US Army in October of 1945, spending a year and a half in Alaska before an honorable discharge.

Not happy with civilian life, he re-enlisted in the US Army in January of 1948.

PFC Thompson was known to be a good soldier, he was comfortable with the discipline and was an accurate marksman.

Shortly after the beginning of the Korean War, he was assigned to the 24th Infantry (one of the last remaining segregated units), as a machine gunner.  On August 6, 1950, PFC Thompson earned a Congressional Medal of Honor during the Battle of Pusan Perimeter., when, wounded by small arms fire and grenade fragments, he continued to maintain fire, despite orders to retreat and stayed behind providing cover fire for his units retreat. He was killed in action.