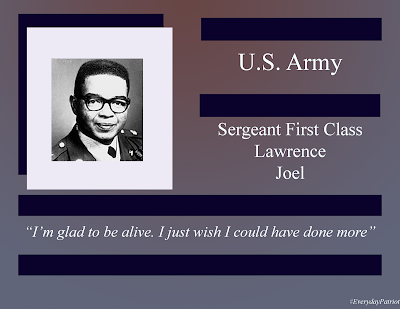 Born on February 22, 1928, in Winston-Salem, North Carolina.  After spending a year as a Merchant Marine, he enlisted in the U.S. Army in 1946, at the age of 18, and chose, from the beginning to be a career soldier.

Sergeant Joel trained as a combat medic and in addition to his Korean War deployments, earned a Congressional Medal of Honor during the Vietnam War's Operation Hump, when, on November 8, 1965, while assigned to the 503rd Infantry Regiment, he remained in the field (wounded and against orders) and continued to render aid during a firefight that lasted more than 24 hours.

Sergeant Joel retired from the U.S. Army in 1973 and worked with the Veteran's Administration until 1982.  He died in 1984 and rests in Arlington Cemetery.