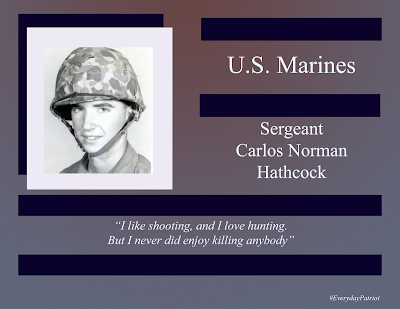 Sergeant Carlos N. Hathcock was born on May 12, 1942, in Little Rock, Arkansas.  An avid hunter and accomplished shooter, he won several shooting competitions, including the Wimbledon Cup prior to his enlistment in the U.S. Marine Corps.

Originally assigned to Military Police, Sergeant Hathcock's shooting accuracy quickly had him reassigned as a sniper, and he deployed to Vietnam.

While in Vietnam he eliminated 93 confirmed targets, including his most famous shot, in which he shot an enemy through the enemy's own rifle scope.  The North Vietnamese Army placed a bounty of $30,000 dollars on his head.

Sergeant Carlos Hathcock's combat career ended on September 16, 1969, when the AMTRAC he was in struck an anti-tank mine, and while pulling other Marines to safety, sustained 3rd-degree burns.  He remained with the Marine Corps and helped establish the Marine Corps Sniper School.

Eventually, his health deteriorated to the point where he could no longer serve and medically retired.  He continued to teach sniping skills to police forces and several military units.  He also began shark fishing as a hobby.

He died on February 22, 1999, from Multiple Sclerosis, and rests in Wood Lawn Memorial Garden in Norfolk, Virginia.