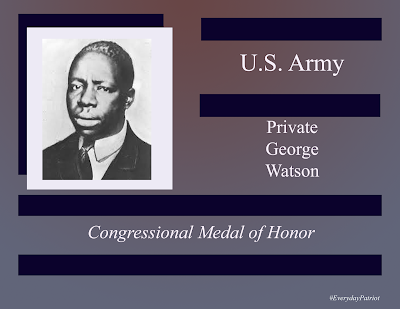 Private George Watson was born about 1915 and grew up in Birmingham Alabama.  He joined the U.S. Army on September 1, 1942, and was assigned to the 29th Quartermaster Regiment.

While traveling to New Guinea, his transport ship, Jacob, was struck by enemy bombers on March 8, 1943, and began to sink.

A competent swimmer,  Private Watson assisted other soldiers to life rafts.  The suction from Jacob's submersion, however, pulled him under prior to his entering a life raft.

His body was never recovered.  These actions earned him a Congressional Medal of Honor.

As an orphan, the U.S. Army retained his medals and they are currently on display at the U.S. Army Quartermaster Museum in Fort Lee, Virginia.
Labels: Army Biography Congressional Medal Of Honor Died in Service Missing WWII
Location: Birmingham, AL, USA