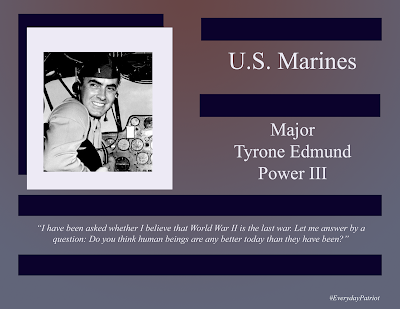 Born on May 5, 1914, in Cincinnati Ohio, Major Tyrone Edmund Power III was raised amongst a well-known family of actors.

After his high school graduation from Purcell High School in 1931, he began acting on stage, with small parts, and as an extra until transitioning to Hollywood in 1936.

Major Powers enlisted in the U.S. Marines during WWII, and, because of his prior pilot experience, was able to easily earn his wings.  Considered too old for combat flying, Major Powers was assigned to the Marine Transport Squadron, flying supplies in and wounded out through the battles of Iwo Jima and Okinawa.  Although he left active service, Major Power continued to serve through the U.S. Marine Corps Reserve.