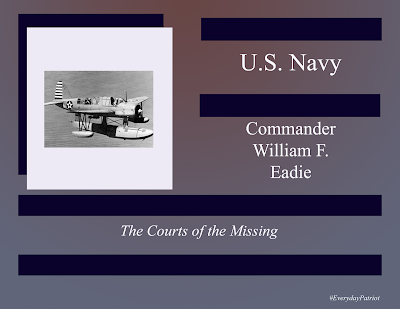 Enlisting in the U.S. Navy, he was a Kingfisher pilot who once scouted the survivors (including Captain Eddie Rickenbacker) of a B17, which had wrecked in the ocean three weeks prior.  Commander Eadie had loaded the survivors onto the wings of the plane and taxied to the nearest base.

Commander William F. Eadie is memorialized in The Courts of the Missing, in Honolulu HI.  There was also a Chicago area airfield, Eadie Field, named in his honor, although it has since been converted to a park.
Labels: Biography Died in Service Missing Navy WWII
Location: Chicago, IL, USA