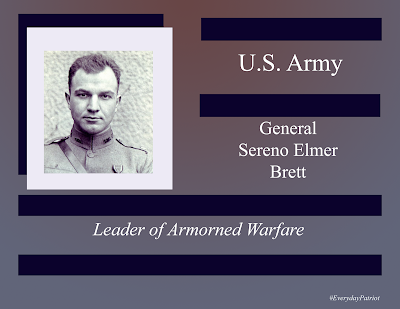 General Sereno Elmer Brett was born on October 31, 1891, in Portland, Oregon.  He attended Oregon State University, graduating in 1916.   He then enlisted in the U.S. Army.

His first deployment was with the 3rd Infantry Regiment during the Pancho Villa Expedition.

After that deployment, General Brett focused on armored vehicle warfare,  leading a tank battalion during WWI with the Western Front Tank Corp, and led the attack at the Battle of Saint Mihiel in September of 1918.

Between the wars, General Brett worked with General Patton and General Eisenhower to evaluate and optimize tank warfare.  He was also the Chief of Staff of the Armored Division in Fort Knox.

During WWII he was on staff in the 5th Armored Division as it prepared for the European Theater.  General Brett retired from the U.S. Army in October of 1943. He dies on September 9, 1952, in Santa Barbara California, and rests in Arlington Cemetery.

General Brett's reports, diaries, and memorandums were donated to the University of North Dakota and are a rich resource in both armored tactics as well as the careers of General Patton and General Eisenhower.
Labels: Army Biography Mexican Expedition WWI WWII
Location: Portland, OR, USA