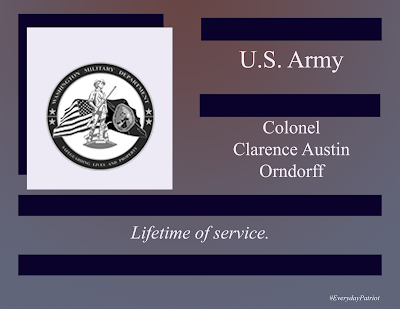 Born on May 17, 1894, in Spokane Washington, Colonel Clarence Austin Orndorff, graduate of Gonzaga University, served with the U.S. Army through WWI, afterward, he joined the Washington State National Guard.

Maintaining a civilian life as a lawyer, Colonel Orndorff also maintained a National Guard career until 1945, including a deployment to Guadalcanal during WWII, where he was injured.

Colonel Orndorff also served as the Commanding officer of the 95th Regiment JRTC.