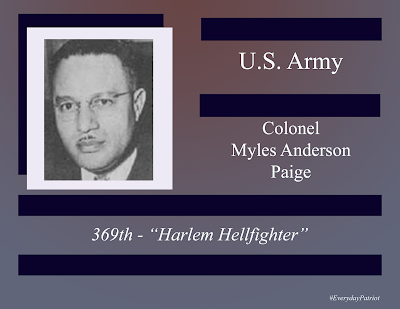 A member of the 15th New York National Guard, he deployed with the 369th Infantry to France, where, the regiment earned the nickname the "Harlem Hellfighters" and spent a total of whopping 191 days on the front line -more than any other unit.

He attended Howard University, where he played football and after graduation entered Columbia Law School while also working as an assistant librarian.

He passed the New York State bar in 1925.  Colonel Myles Anderson Paige began working with the Attorney General of New York, before being appointed to the Magistrates Court and then, in 1939 he was appointed to the Court of Special Sessions, becoming the first American of African descent to be appointed as a criminal court judge in New York.

Colonel Myles Anderson Paige returned to active duty during WWII, assigned to a command post with the Third Separate Battalion.  He retired from military life in 1945.

He was active in Catholic organizations as well as an active participant in Civil Rights.

Colonel Paige died on March 30, 1983, and rests at the Inglewood Park Cemetery in Los Angeles California.