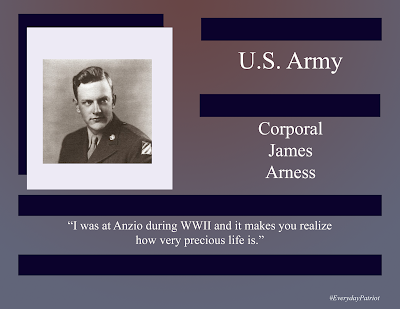 Born James King Aurness on May 26, 1923, in Minneapolis, Minnesota.

After his high school graduation in 1942, Corporal Arness wanted to be a Naval Aviator, but at 6'7" he was too tall.  Instead, he accepted his draft into the U.S. Army, where he trained as a rifleman and was assigned to the 3rd Infantry Division.

Corporal Arness landed with U.S. Forces during the Battle of Anzio on January 22, 1944, where he was severely wounded in the right leg.  After several surgeries and months of hospitalization, he was honorably discharged in January 1945.

After his service, Corporal Arness attended Beloit College and worked as a radio announcer for WLOL before hitchhiking to Hollywood.

After appearing in several Westerns, John Wayne recommended him for the crew of Gunsmoke and the role of Matt Dillion. His role in Gunsmoke would last for more than 20 years.  Corporal Arness also wrote an autobiography, James Arness, An Autobiography.

He died on June 3, 2011, and rests in the Forest Lawn Memorial Park Cemetery.

Corporal James Arness is memorialized with a star on the Hollywood Walk of Fame as well as being inducted into the National Cowboy and Western History Museum in Oklahoma City.