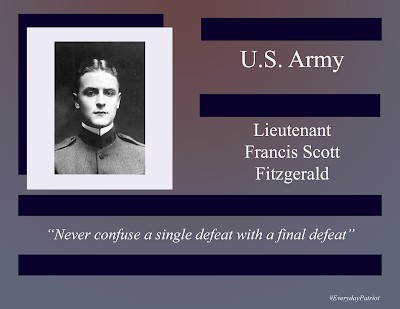 Educated largely by private Catholic academies, he went on to Princeton University, writing for The Princeton Triangle Club, the Nassau Lit, and the Princeton Tiger before dropping out in 1917 to join the U.S. Army.

Lieutenant Fitzgerald trained at Fort Leavenworth under General Eisenhower, although the two were never good friends.  He wrote his first novel, The Romantic Egotist during this period, although it was rejected by publishers.

After training, he was stationed at Camp Sheridan in Montgomery Alabama, where his military career resembled that of Anthony Patch's in The Beautiful and the Damned.  He was released from service in 1918 when the war ended.

He re-wrote The Romantic Egotist, renaming it This Side of Paradise, launching Lieutenant Fitzgerald into literary fame.

His brief and wild career produced four novels and almost 200 short stories.  He also worked on Hollywood screenplays and did script doctoring.