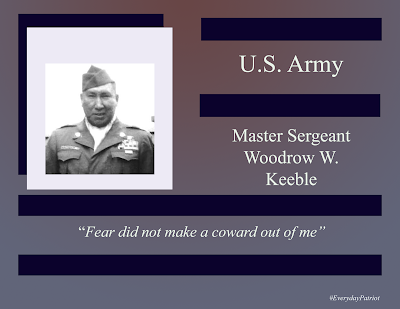 Born on May 16, 1917, in Waubay South Dakota, Master Sergeant Woodrow W. Keeble, a member of the Sisseton Wahpeton Oyate Native American tribe, was an avid baseball player who was being scouted by the Chicago White Socks.

He was also a member of the North Dakota National Guard's 164th Infantry regiment and was deployed twice into combat, once during WWII, participating in the Battle of Guadalcanal, and once, during Korea, earning a Congressional Medal of Honor during the fight for Hill 675-770.  The injuries he sustained in that fight retired him from combat.

In both cases, his throwing arm was put to good use and Master Sergeant Woodrow W. Keeble was well known for his grenade use.

He taught at the Wahpeton Indian School between his combat deployments and after his military retirement.