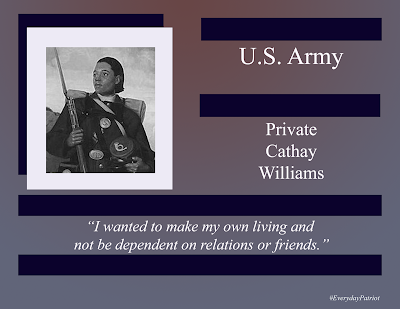 Private Cathay Williams was born enslaved during the month of September 1844 in Independence Missouri.

She worked as a house slave for the Johnson Plantation near Jefferson City Missouri.

The Union considered enslaved persons "contraband" and regularly impressed them into service. When Jefferson City came under Union control, she was "confiscated" and assigned to the 8th Indiana Volunteer Infantry Regiment, traveling with them as a seamstress and cook.

On November 15, 1866, she disguised herself as a man and enlisted into the U.S. Army as William Cathay and was assigned to the 38th Infantry Regiment (known as the Buffalo Soldiers) and stationed in New Mexico.  Catching smallpox shortly after enlistment, she struggled with her health but kept her secret for almost 2 years before her gender was discovered by the post doctor.  She was discharged on October 14, 1868.

Private Cathay Williams remained in the Southwest, supporting herself as a seamstress and cook.

Her health continued to deteriorate but she was denied any military pension.  It is believed she died around 1893 and her final resting place is unknown.

The U.S. Army has acknowledged her service by placing a memorial bench at the National Infantry Museum.   She is believed to be the first woman of African descent to serve in the U.S. Military.