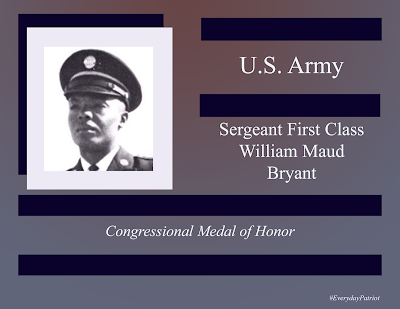 Born on February 16, 1933, in Cochran Georgia, Sergeant First Class William Maud Bryant moved to Detroit Michigan prior to enlisting in the U.S. Army in 1953.

On March 24, 1969, Sergeant Bryant earned a Congressional Medal of Honor.  While assigned to the Long Khanh province in Vietnam, his patrol came under fire and during the next 36 hours was in active combat.  Under fire, he scouted the perimeter, retrieved fallen ammunition and assisted with the wounded.  His service during this time was said to be an inspiration to his team.  Sergeant First Class William M. Bryant did not survive the fight.  He rests in the Raleigh National Cemetery.