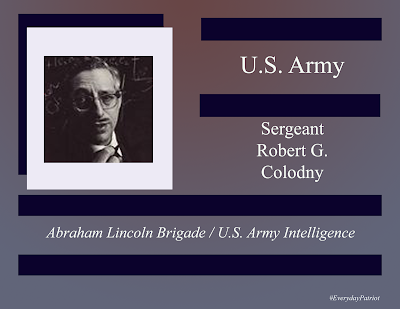 Born on August 5, 1915, in Phoenix, Arizona, Sergeant Robert G. Colodny, an avid scholar and idealist, enlisted in the Abraham Lincoln Brigade and sailed to the Spanish Civil War on February 20. 1937.

Severely wounded after being shot in the forehead, Sergeant Colodny left Spain partially paralyzed and blind in his left eye by March 1938.

Despite his health issues, he enlisted in the U.S. Army and in 1941 was assigned to Army Intelligence and stationed in the Aleutian Islands.  There, with Sergeant Dashiell Hammett wrote the newsletter The Adakian, and co-authored The Battle of the Aleutians.

After the war, he returned to Berkeley to get a doctorate in History and Philosophy and in 1959 joined the faculty at the University of Pittsburg.

In 1961, under the paranoia of McCarthyism, Sergeant Colodny was brought before the House Un-American Activities Committee after accusations of Communist sympathies.  He was completely cleared of all charges and continued to teach until his retirement in 1984.

Pro-civil rights and anti-Vietnam, Sergeant Colodny wrote extensively about the Spanish Civil War in addition to authoring many essays about science and philosophy.