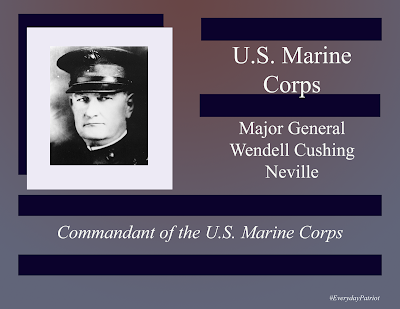 On May 12, 1870, in Portsmouth, Virginia, Major General Wendell Cushing Neville was born.

He entered into the military academy at Annapolis in 1886, graduating in 1890, beginning a military career that would span almost 40 years, many of them in combat roles.

While still a cadet, he was assigned to the 1st Battalion during the Spanish American War and took part in the Naval attack on Guantanamo Bay.  From there, Major General Neville was transferred to China, for the Boxer Rebellion.

After his China post, he was then assigned to the Philippines, Cuba, Nicaragua, Panama, and finally Hawaii before taking part in the Occupation of Veracruz, where he commanded the 2nd Advance base and earned a Congressional Medal of Honor on April 21, 1914, during the Veracruz Intervention.  He returned to China in 1915 to command the Allied Guard.

During January of 1918, Major General Wendell Neville was assigned the command of the 5th Regiment, stationed in France, and he coordinated the taking of Hill 142, giving the Marines a foothold and halting the enemy advance at Belleau Wood.

Popular posts from this blog

Despite his political affiliations and tuberculosis, he managed to re-enlist in the U.S. Army in 1942, after the attack on Pearl Harbor.  Sergeant Hammett was assigned as editor of the Army newspaper The Adakian.  He also co-authored, with Sergeant Robert Colodny, The Battle of the Aleutians, under…
Read more