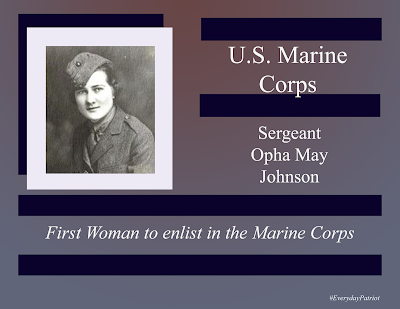 Sergeant Opha May Johnson was born on May 4, 1878, in Kokomo, Indiana.  Moving to Washington DC, she graduated from Wood's Commerical College in 1895.

Sergeant Johnson worked for the Interstate Commerce Commission until 1918 when the U.S. Marine Corps opened enlistment to women.

She was assigned to clerical duties at Marine Corp headquarters.

Discharged at the end of the war, she went on to work for the war department, still serving the Marine Corps, until her retirement in 1943.  Sergeant Johnson died on August 11, 1955, and rests in Rock Creek Cemetery.
Labels: Biography Marines WWI
Location: Kokomo, IN, USA